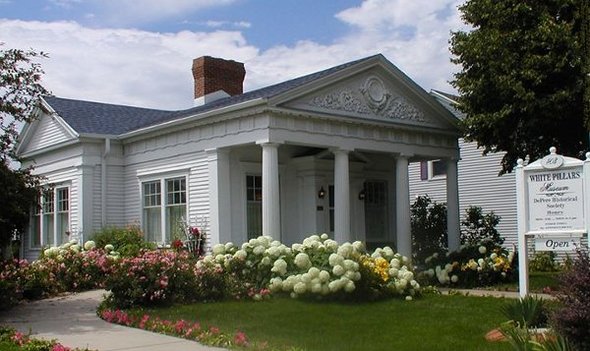 Home of the De Pere Historical Society
The De Pere Historical Society came into being in March of 1970 through the efforts of community leaders such as Father Anselm M. Keefe, Roger Rebman and Max Franc. Initially, the organization was funded by a generous donation of $5,000 from Nicolet Paper. Rebman became the society’s first president, and Max Franc became the curator of the first historical museum of De Pere, Heritage Hall. It was in early 1973, that the De Pere Historical Society acquired the White Pillars Building from the heirs of Miss Elizabeth Goffard, who lived in the building until her death in 1972. With $25,000 generously donated by the Fort Howard Paper Foundation, White Pillars Museum officially opened in September of 1973.

The building that became White Pillars Museum has served numerous roles over the years. First built in 1836, White Pillars is the oldest building in De Pere, and is on the National Registry of Historic Buildings. Originally, it served as the headquarters of the Fox River Hydraulic Company whose purpose was to utilize the water power of the Fox River for commercial usage such as power powered mills, and to dam the Fox River. Since then, White Pillars has served our community as a church, a barber shop, an antique shop, and a private school. In 1913, local building contractor Alfred Fleck purchased the building and it was Fleck who removed the squared timbers that supported the porch roof, and replaced them with our beloved four “White Pillars” in the early twentieth-century. Since 1973, White Pillars Museum has served as a repository for De Pere’s history even as our community has made new history. From the ice cream socials of the 1970s to the creation of the technologically cutting-edge Museum Archive Research System, the De Pere Historical Society has changed to meet the challenges of serving the needs of our community in an ever changing world, while never wavering from the mission of preserving our community’s heritage for future generations.