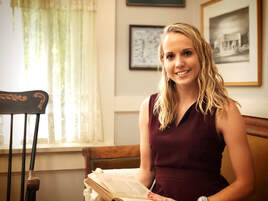 Amanda Reif began her journey with the De Pere Historical Society in February 2019 as an intern for the Education Initiative Project. In July 2019, Amanda became an employee of the De Pere Historical Society as Exhibit Coordinator. Most recently, her role was promoted to Director/Curator.  In this new position, Amanda’s focus is on research, development, and education initiatives.
​Amanda came to us with a Bachelor of Arts in Anthropology from the University of Wisconsin- Oshkosh with Religious Studies (World Religions) and French language minors. She has a Certificate in Archaeology from the Belize Valley Archaeological Reconnaissance Program, where she assisted in large-scale digs of ancient Mayan ruins at well-known sites such as Cahal Pech and Xunantunich. She is also a past student of NWTC where she gained skills in the creation and analysis of digital maps and data. Amanda has experience in proper handling and cataloging of historical documents and artifacts. In addition, she has worked in the event business which included planning and fundraising. Amanda lives in Kaukauna with her husband Kyle & their "fur-babies." In their spare time they enjoy going to breweries/wineries, traveling & being in nature when they can.